By becoming partner countries Australia and the Republic of Bulgaria will make concessions against their social security qualification rules so that people covered by the agreement may access payments for which they might otherwise fail to qualify. Australia already has a number of similar social security agreements with 32 countries. Under these agreements, Australia equates social insurance periods/residence in those countries with periods of Australian residence in order to meet the minimum qualifying periods for Australian pensions.

Meeting with the Deputy Minister of Economy

BABC delegates met with the Deputy Minister of Economy Liliya Ivanova today to discuss trade and investment between Australia, New Zealand and Bulgaria.
The meeting started with a short review of BABC activities and achievements up to date.
The status of the negotiations for Free Trade Agreement, the main industry sectors of interest for investment and the need to promote Bulgaria in Australia and New Zealand as an attractive European destination for business development, trade and investment activities were some of the topics during the meeting. 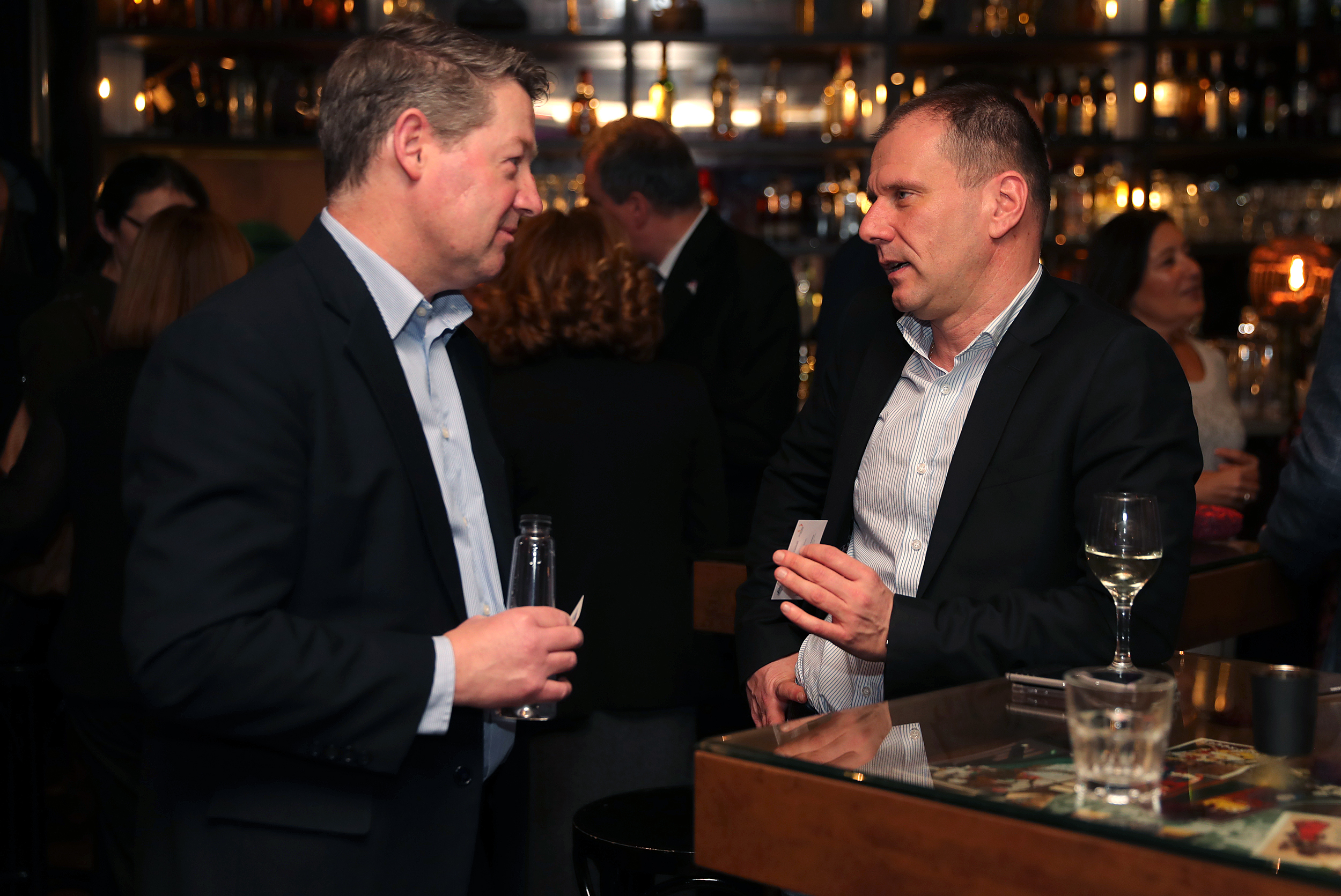 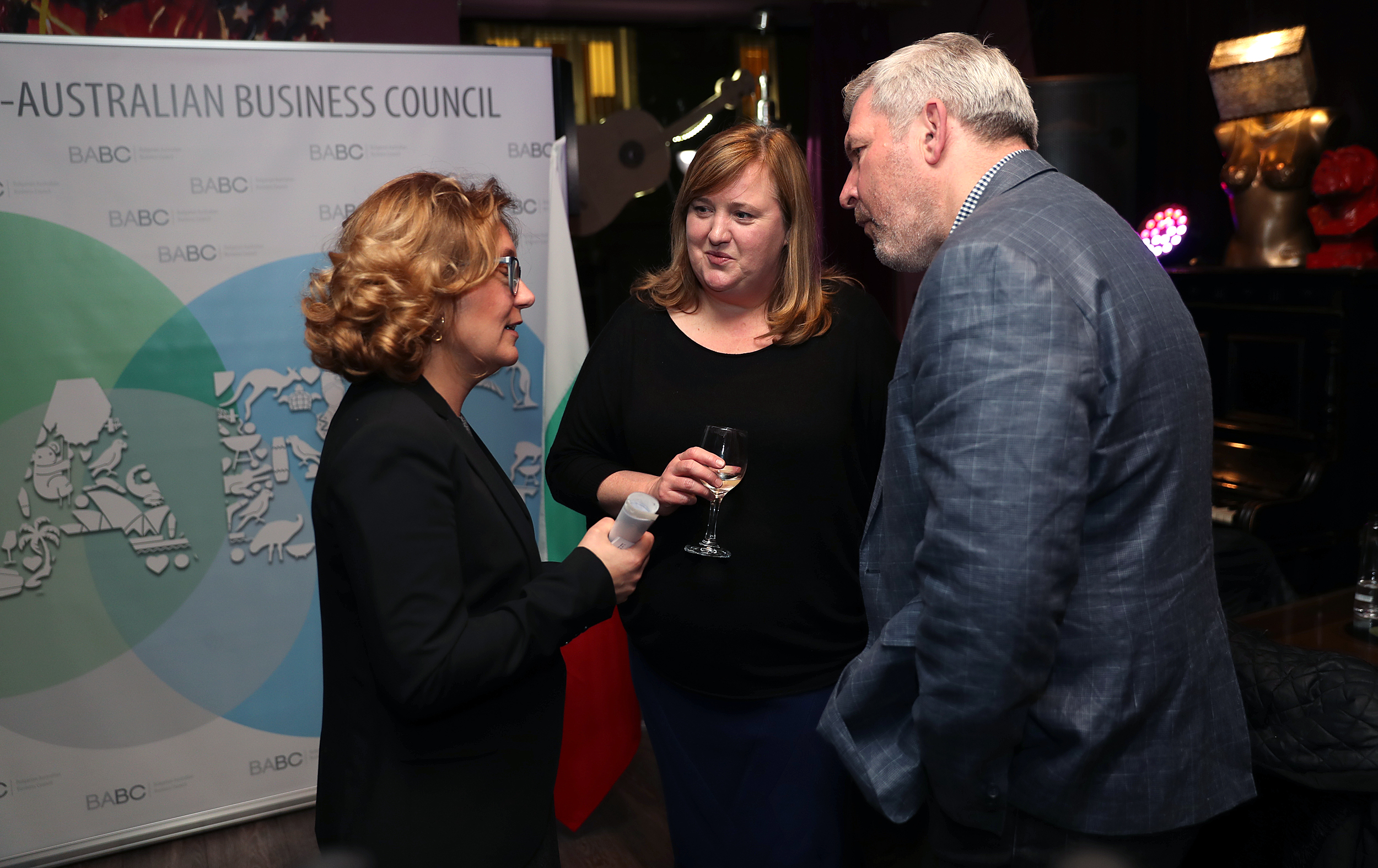 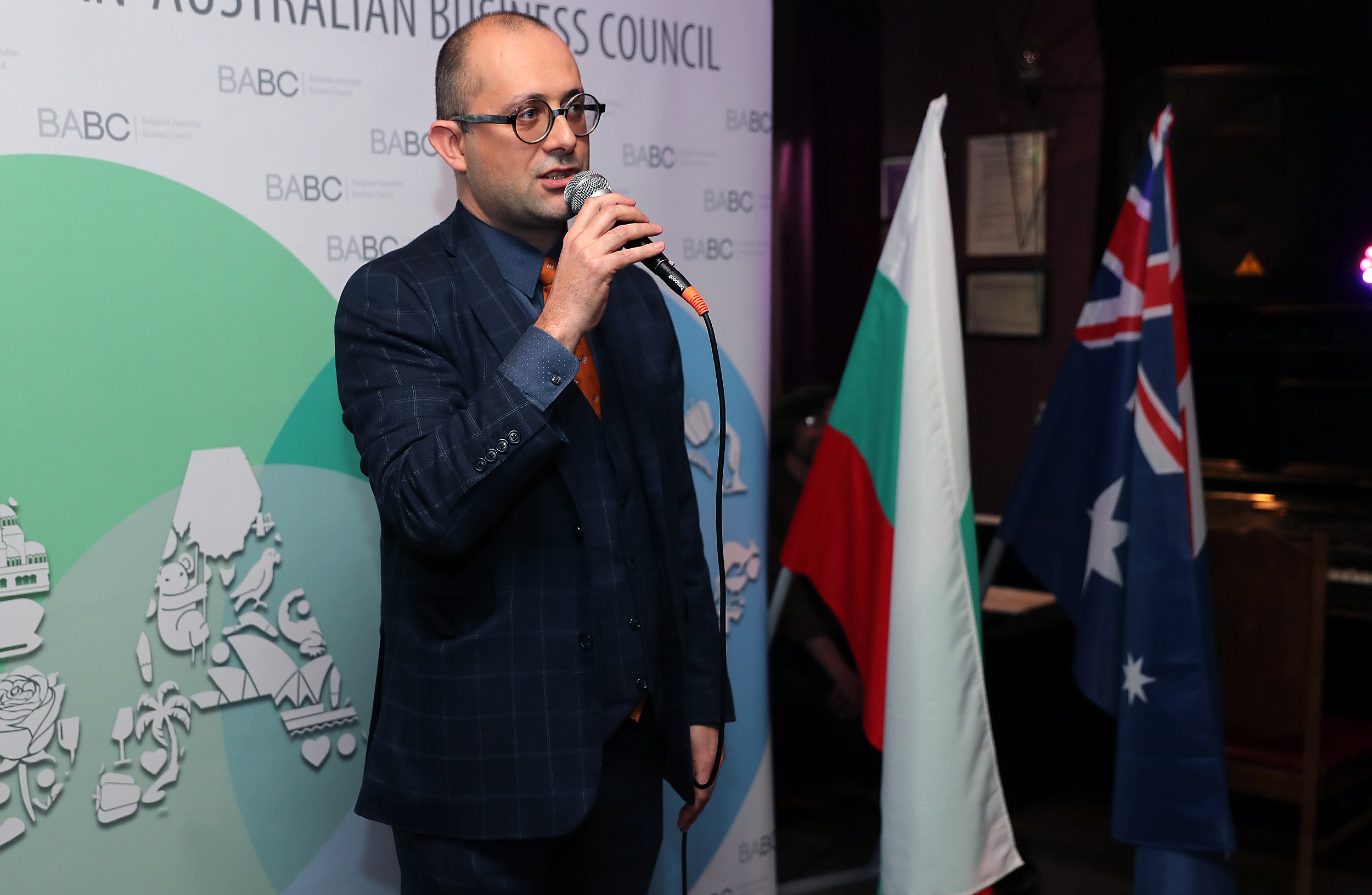 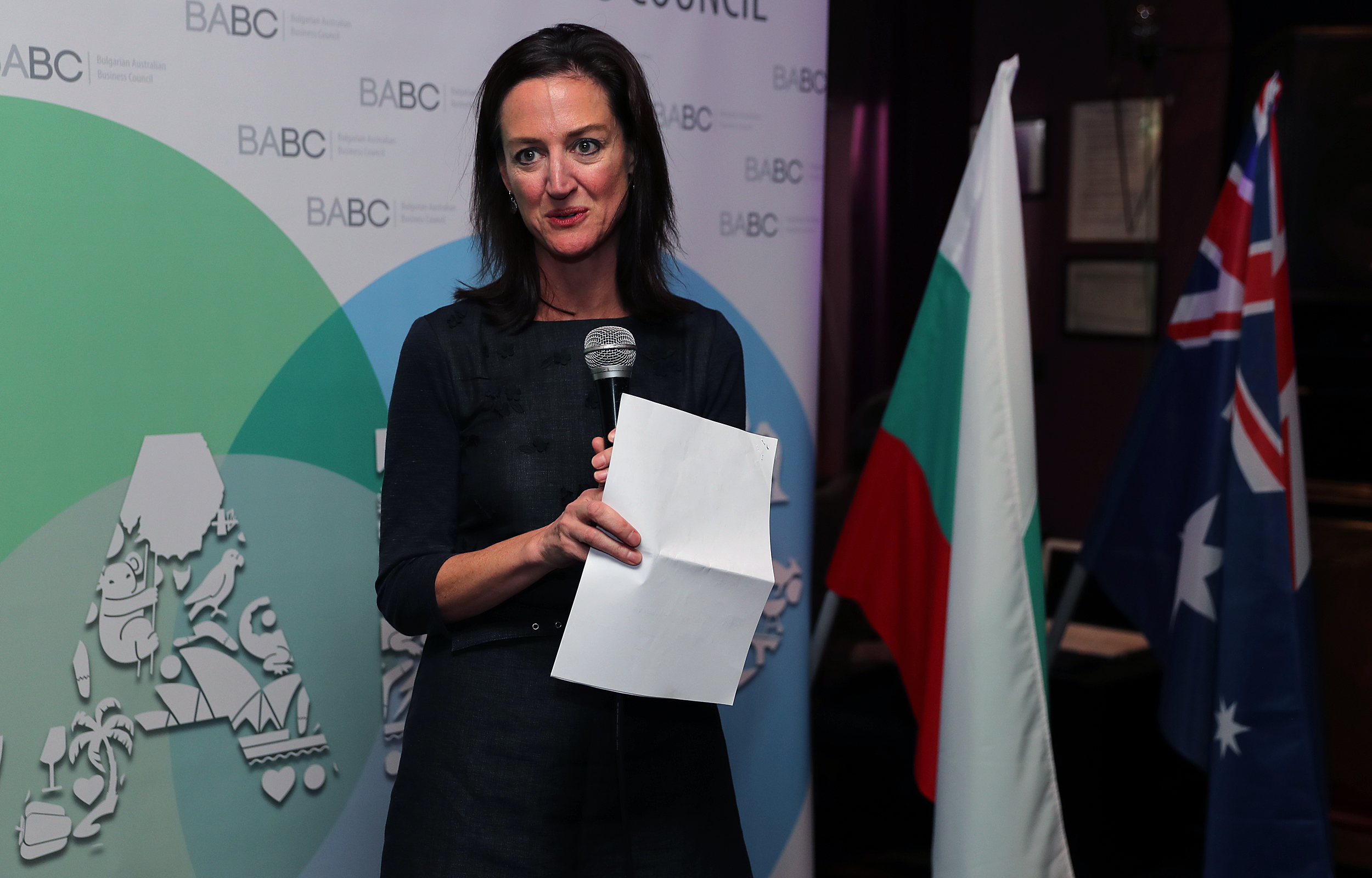 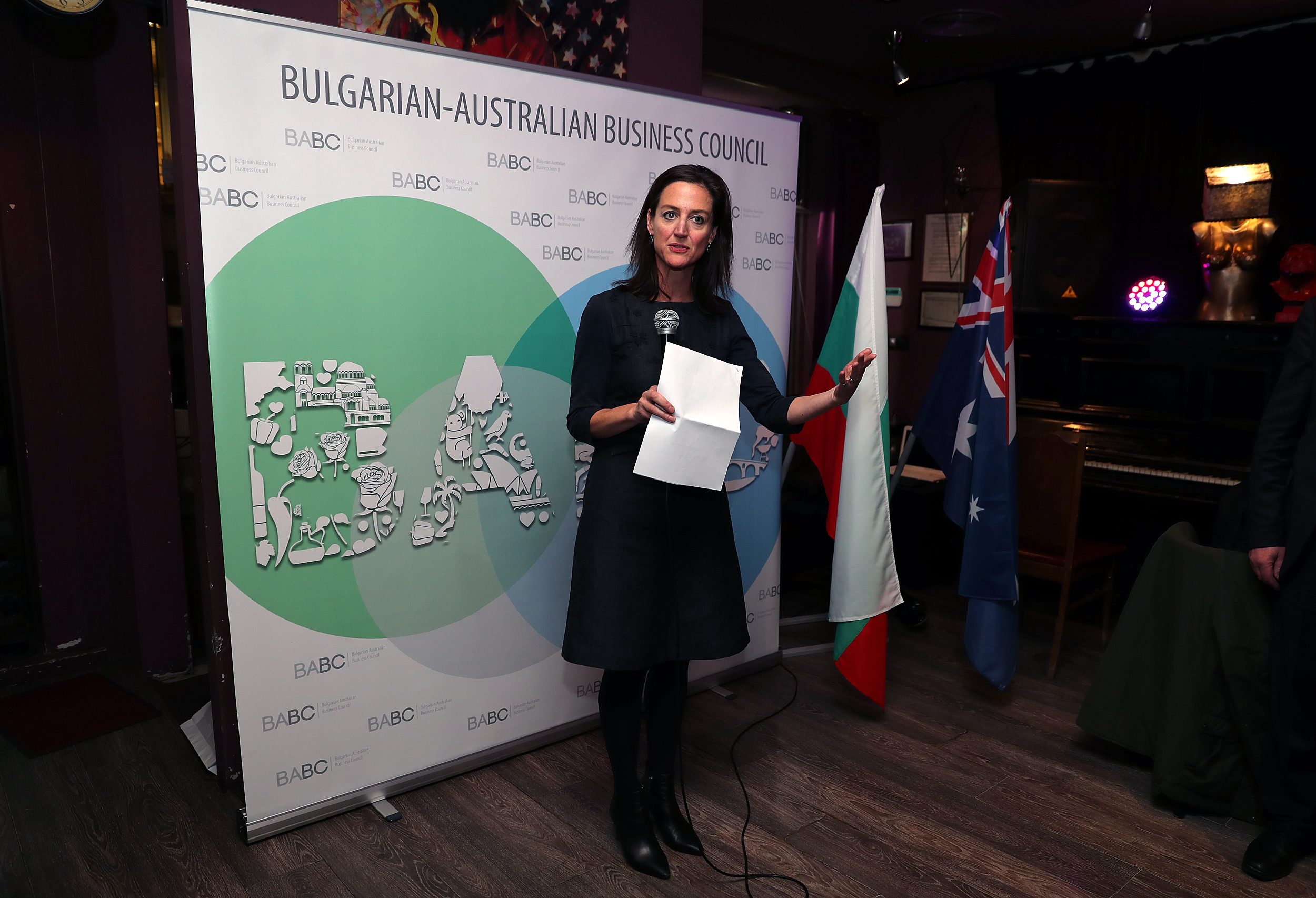 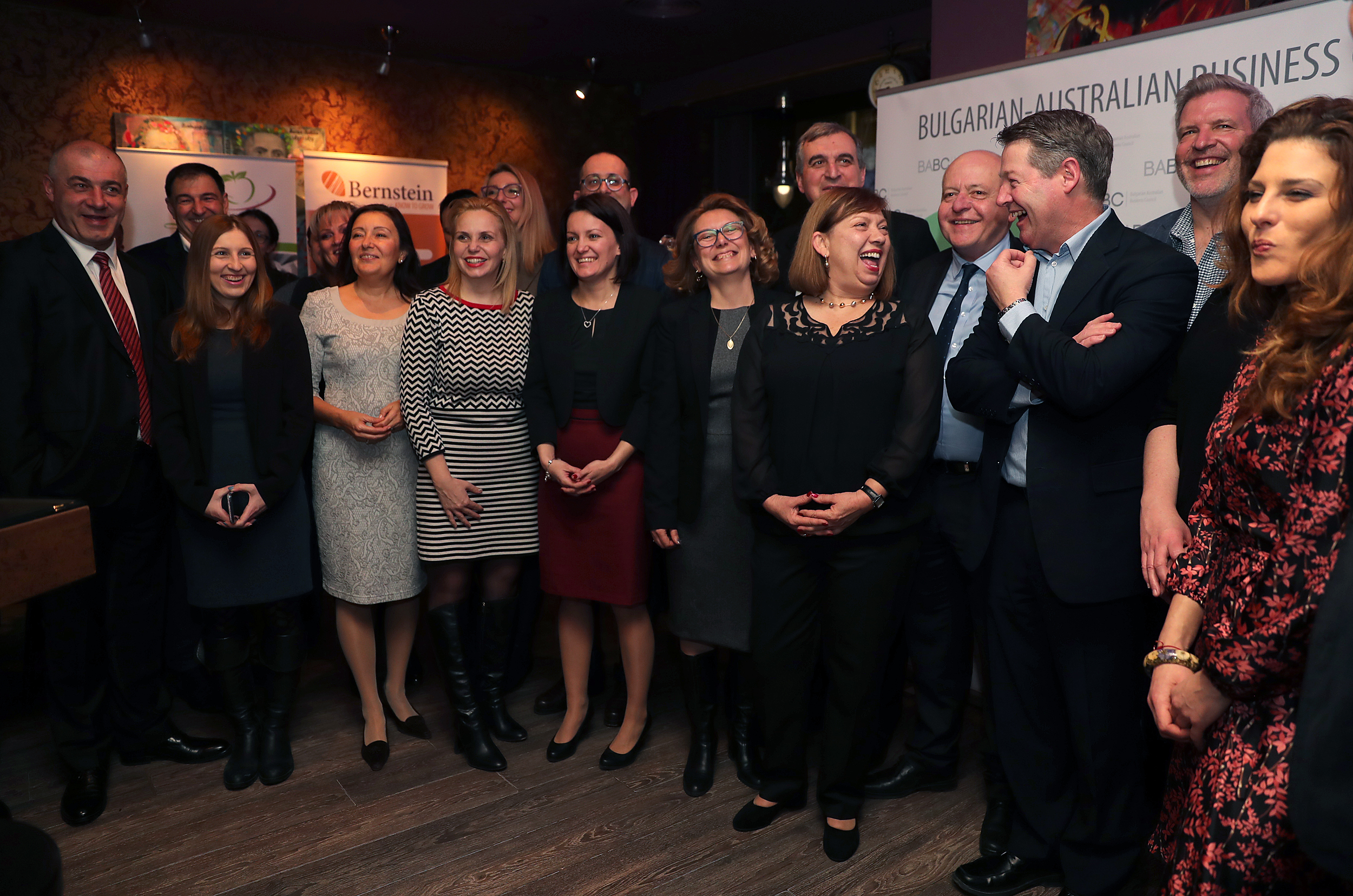 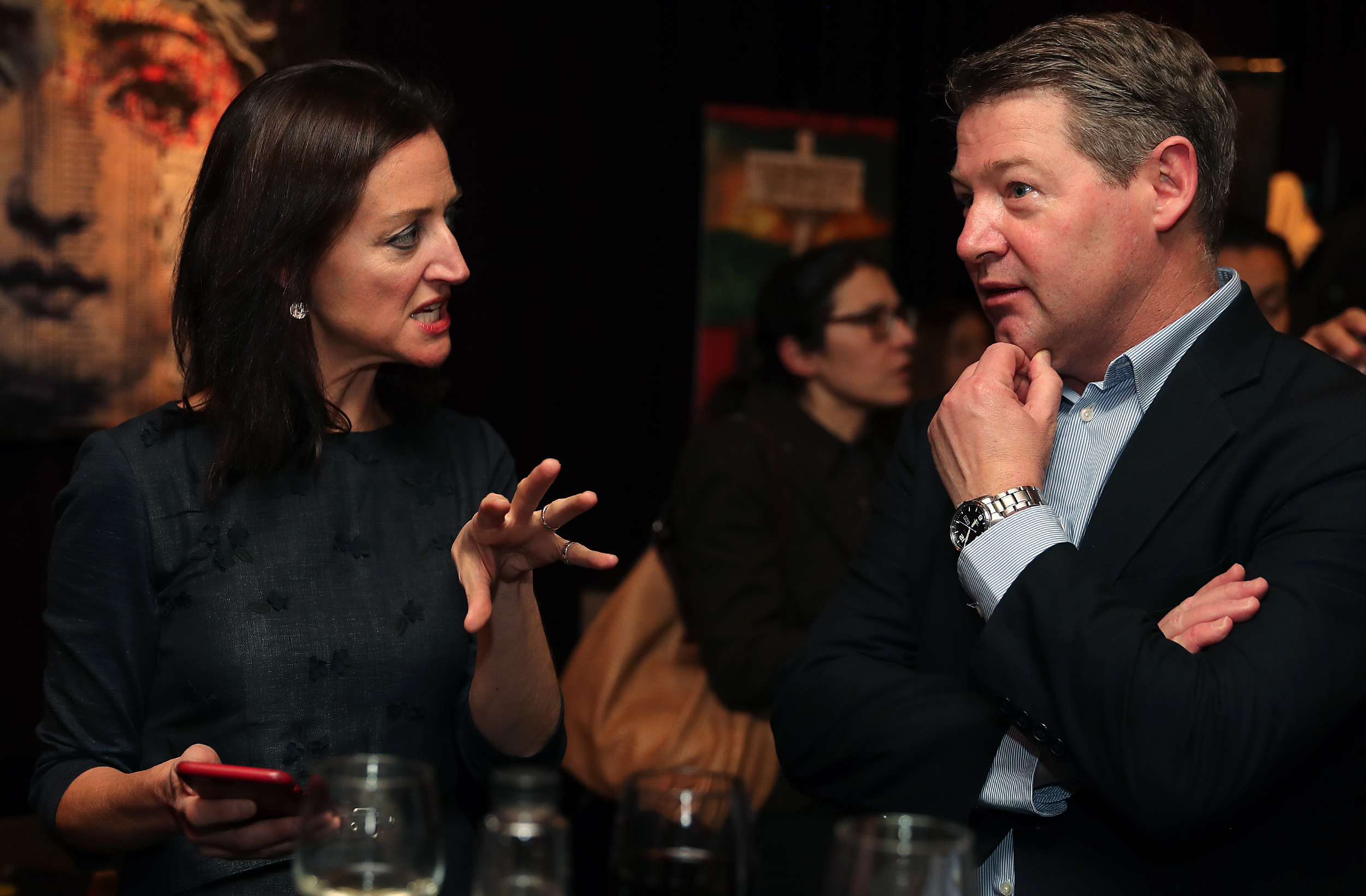 The first official event of BABC gathered together the Ambassador of Australia, responsible for Bulgaria – Kate Logan, Indiana Trifonova, Honorary Consul of Australia for Bulgaria, Consul Janine McLennan, as well as many representatives of the Bulgarian business and people from the Ministry of Foreign Affairs and the Ministry of Economy.
29 January, Sofia – The reception on the occasion of Australia Day started with a speech from the Australian Ambassador Kare Logan, who highlighted the importance of the development and improvement of the trade contacts between the two countries, the exchange of information and the opening of new business opportunities in Bulgaria and Australia. The event took place in Dada Cultural Bar yesterday night and gathered representatives of the business, government officials from the Ministry of Foreign Affairs and the Ministry of Economy.
More information on the role and the mission of the Bulgarian-Australian Business Council (BABC), set up in February 2018, presented Joana Kehlibarova, elected as chairman and CEO of the association.
Ms. Kehlibarova emphasized on the achievements of BABC since the establishment of the organization last year. She also noted the positive development of the ongoing negotiations for a Free Trade Agreement between Australia and the EU.
The official part of the event ended with a congratulatory video from all attendees on the occasion of Australia National Day.

Bulgarian-Australian Business Council participated in the annual EU-Australia Leadership Forum, held in Brussels from 18 to 22 November 2018.

The Forum gathered together key European and Australian leaders from government, business, media, education and civil society to discuss the future relations between Europe and Australia. For the first time, the five-day event took place in Europe.
The main purpose of the event is to extend and deepen the existing links between the two regions and to help form a stable partnership. The project is funded by the European Union (EUR 2 million, approximately AUD 3 million) and covers a period of 3 years (2016-2019).
The event takes place at a key moment for EU-Australia relations, given the recent temporary implementation of the EU-Australia Framework Agreement and the opening of negotiations for a comprehensive free trade agreement between the EU and Australia.
The European Union's Ambassador to Australia, Michael Pulch, explains that the Forum plays an important role in the context of the deepening EU-Australia partnership:
“After 56 years of formal diplomatic relations, the relationship between the EU and Australia is simply too advanced and complex to be summed up by treaties or official meetings. The Forum is designed to ensure that a broader group of leaders from different strands of society becomes even more actively involved in the shaping of the EU-Australia relationship.”
Key speakers and special guests in the forum were: Federica Mogerini, High Representative of the European Union for Foreign Affairs and Security Policy and Vice-President of the European Commission; Elmar Brok, Chair of the Committee on Foreign Affairs of the European Parliament; Reverend Tim Costello, principal advocate of World Vision Australia, Simon Kraan, Vice President of the European-Australian Business Council. 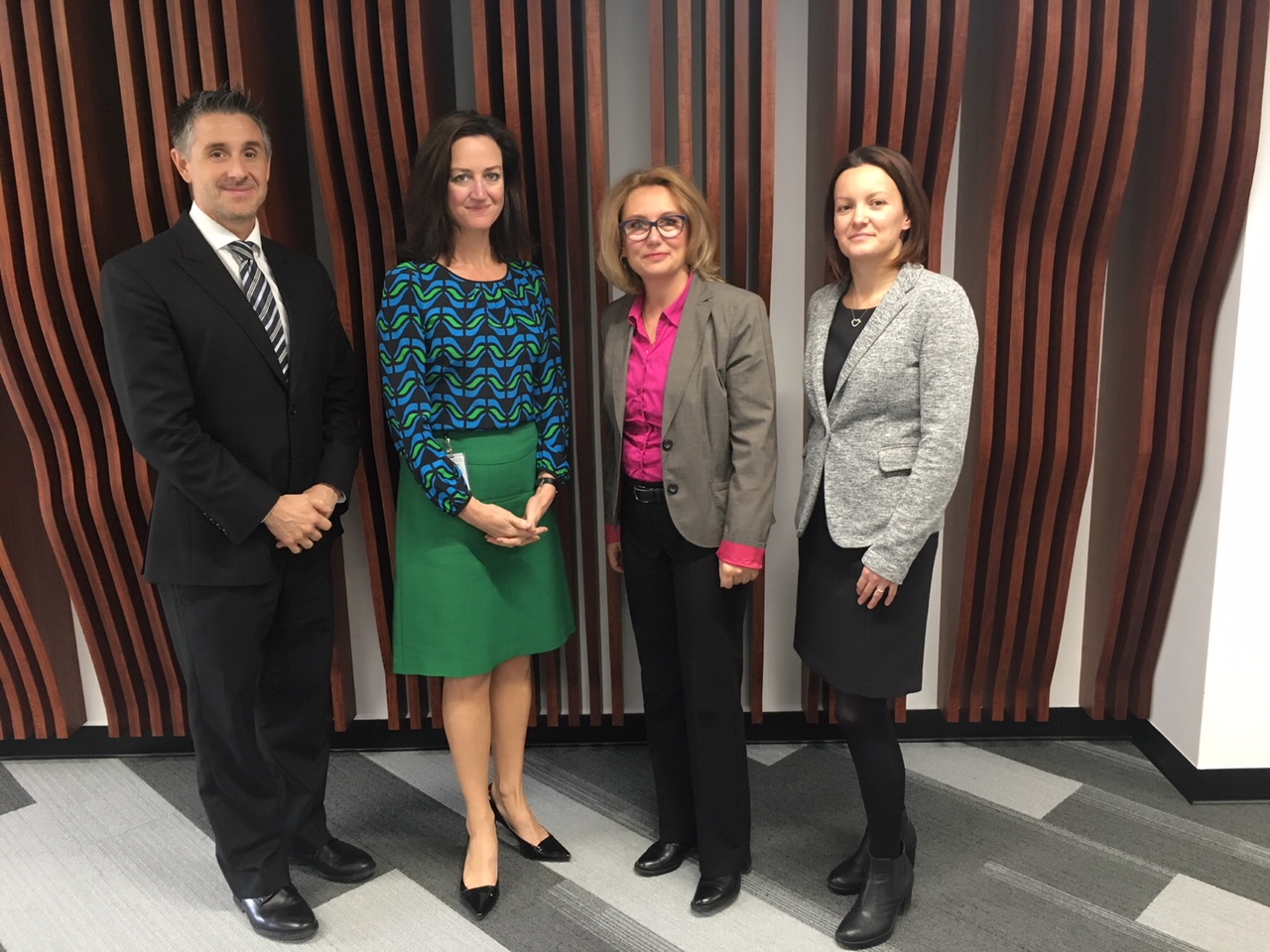 BABC at the Australian Embassy in Greece

BABC delegates met with Kate Logan, H.E. the Australian Ambassador and Andrea Biggi, the Deputy Head of Mission to the Australian Embassy in Athens last week. During the meeting BABC presented the recent activities and achievements of the organization and discussed future action plans and projects of the Council. 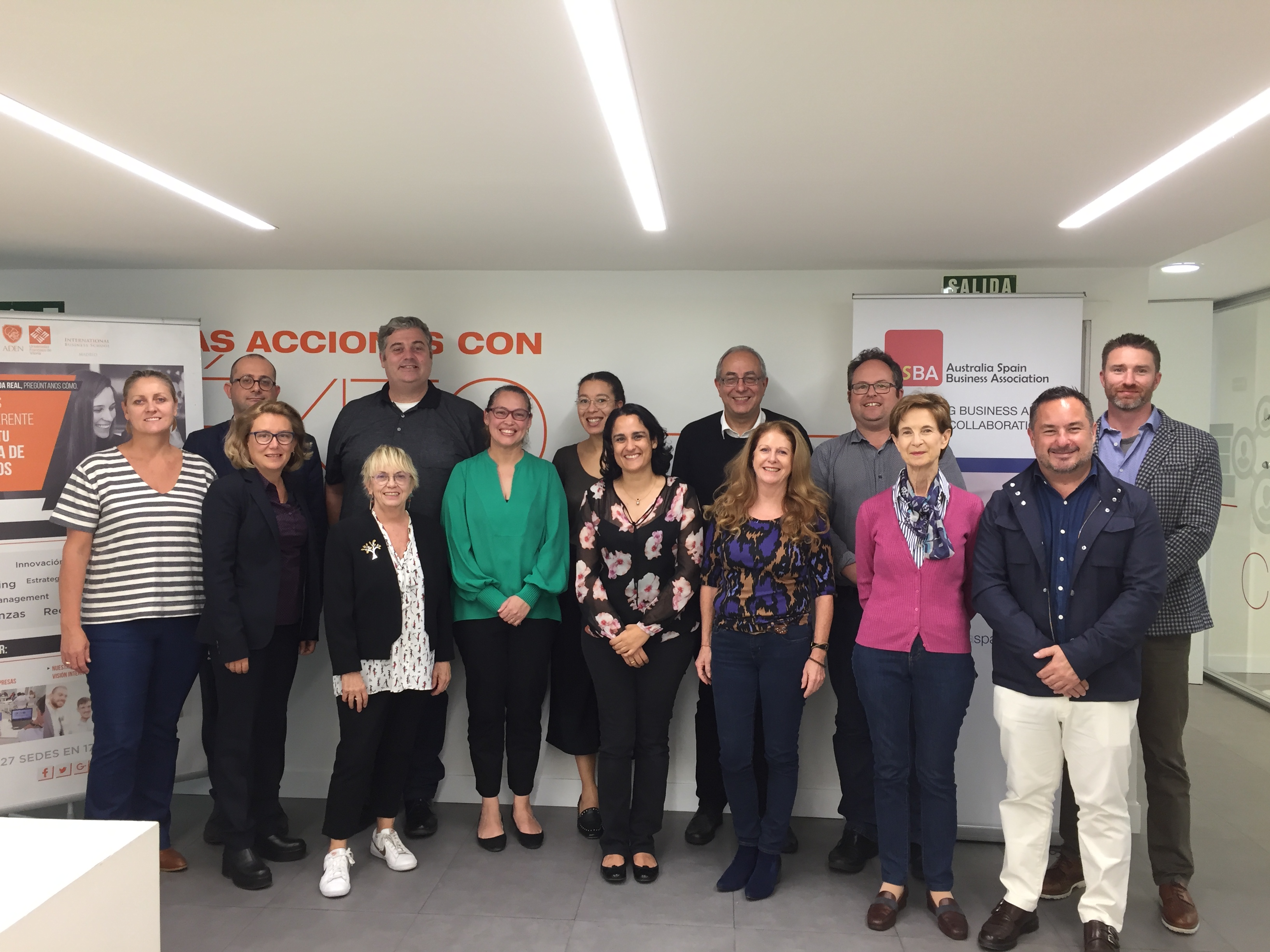 BABC - Next Chair of ABIE

Representatives of ABIE network gathered for a regular meeting in Madrid last week. Some of the main topics of discussion were best practice exchange, country presentations, as well as latest update on the EU-Australia free trade agreement negotiations. 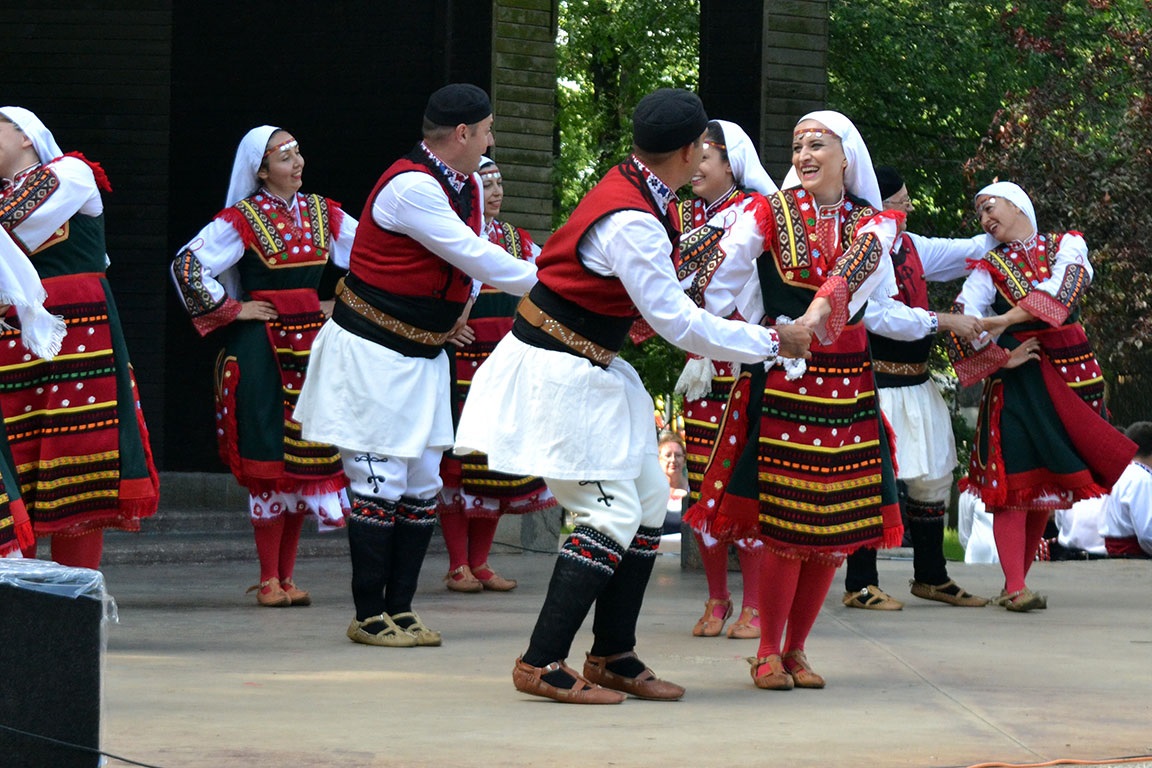 The Bulgarian Australian Business Council sponsored the 5th Folklore Festival, organized by Vitosha club and Azbukari Association, which took place in the end of June at the Summer stage in Borisova Garden Park in Sofia. The event gathered lots of people and admirers of the Bulgarian folklore and traditions. There were presented authentic Bulgarian dances, as well as costumes and choreography.

The European Commission announced today that the impact assessment for the free trade agreements with Australia and New Zealand are now complete and formal negotiations can begin.
Jean-Claude Juncker President of the European Commission said: "These agreements will build on the recent successful agreements with Canada, Japan, Singapore, Vietnam, as well as Mexico among others, expanding the alliance of partners committed to open and rules-based global trade. Open trade must go hand in hand with open and inclusive policy making. That's why the Commission published the draft negotiating mandates with Australia and New Zealand when it proposed to the Council to open these negotiations. These agreements will be negotiated in the greatest transparency and we expect Member States to uphold this high level of transparency."
Commissioner for Trade Cecilia Malmström said: "This is great news. We look forward to adding Australia and New Zealand to the EU's ever-growing circle of close trading partners. We are already close in terms of shared values and our open, global outlook. Together, we will now negotiate win-win trade deals that create new opportunities for our businesses, as well as safeguard high standards in key areas such as sustainable development. I am looking forward to visiting Canberra and Wellington in the coming weeks to officially launch our negotiations."
Commissioner Malmström will travel to Australia and New Zealand in June to open formal negotiations. The first negotiation rounds between are envisaged to take place in Brussels in July 2018.
“After 56 years of formal diplomatic relations, the relationship between the EU and Australia is simply too advanced and complex to be summed up by treaties or official meetings. The Forum is designed to ensure that a broader group of leaders from different strands of society becomes even more actively involved in the shaping of the EU-Australia relationship.”
Key speakers and special guests in the forum were: Federica Mogerini, High Representative of the European Union for Foreign Affairs and Security Policy and Vice-President of the European Commission; Elmar Brok, Chair of the Committee on Foreign Affairs of the European Parliament; Reverend Tim Costello, principal advocate of World Vision Australia, Simon Kraan, Vice President of the European-Australian Business Council.

Meeting with Austrade in Canberra

Delegates from the Bulgarian-Australian Business Council had a meeting with Mark Wood from the Australian Trade and Investment Commission (Austrade), who is responsible for Americas and Europe regions.
BABC official representatives presented the new organization established in Bulgaria. The future initiatives and mutual cooperation to support business, trade and investment relations between Australia and Bulgaria were the main points of the discussion. 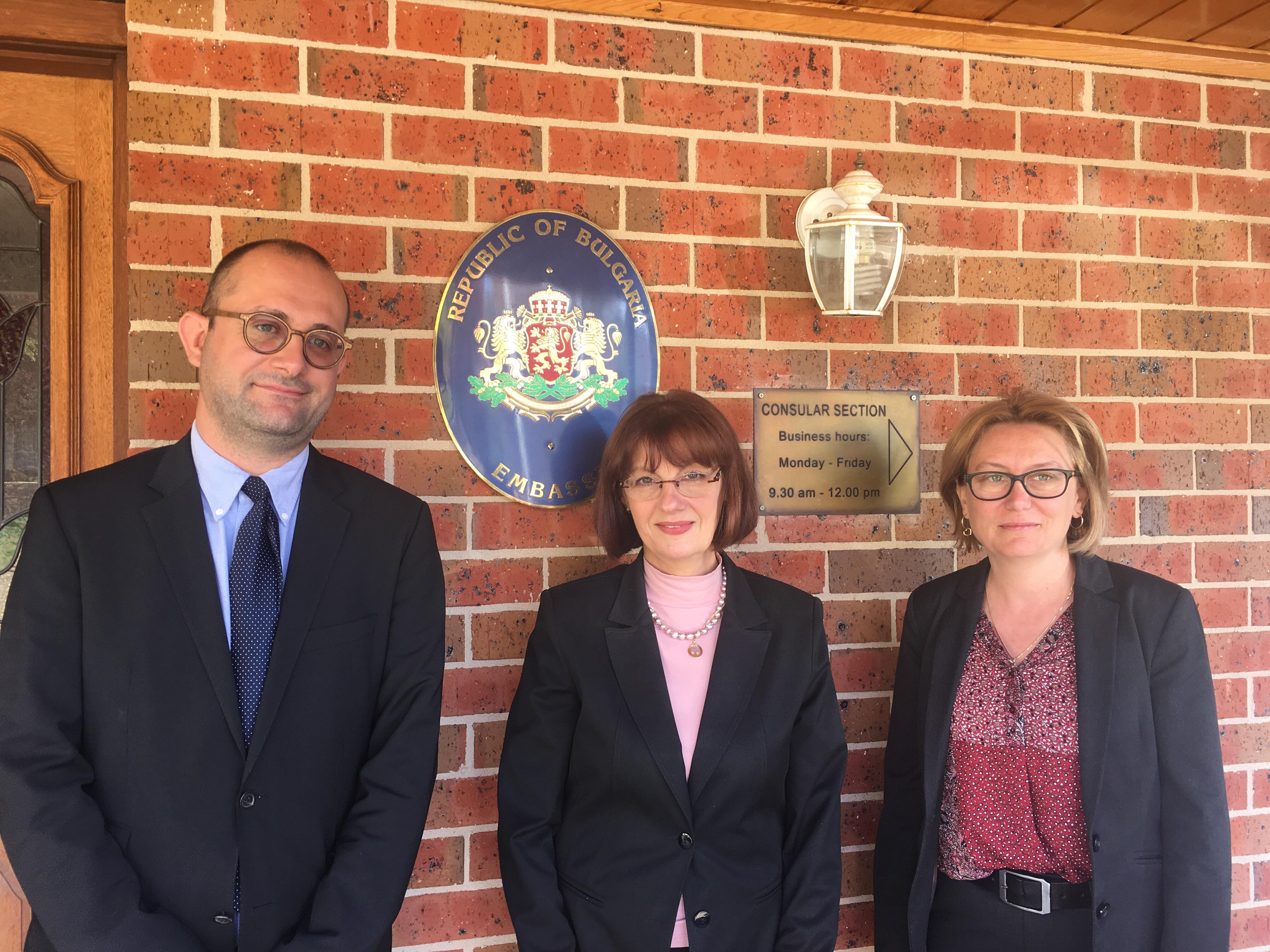 Meeting with the Bulgarian Ambassador in Australia

Meeting in the Australian Department of Foreing Affairs

Delegates of the Bulgarian-Australian Business Council met with Angela McGrath - Director and Carly Stevens - Assistant Director of the Europe Trade Section in the Australian Department of Foreign Affairs and Trade in Canberra.
Joana Kehlibarova and Dimitar Stoimenov presented the mission and objectives of the Bulgarian-Australian Business Council and discussed future initiatives and collaboration.
BABC official representatives expressed their strong support to the European-Australian Free Trade Agreement, which will complement the longstanding trade and investment relationship. The FTA will initiate new bilateral commercial opportunities and will facilitate the creation of new ties with global production and commercial networks, and will help to advance the trade policy interests of the EU in the Asia-Pacific region.
The European Commission aims to finalize the negotiations before the end of its mandate in late 2019.

Meeting with the new Australian Ambassador

H.E. the new Australian Ambassador to Greece with non-resident accreditation to Bulgaria and Romania Ms. Kate Logan visited Bulgaria on Friday to meet the Bulgarian President and representatives of the newly established Bulgarian-Australian Business Council (BABC).
The management board of BABC introduced to Ms. Logan the mission, objectives and plans for development of BABC. During the meeting were discussed bilateral relations between Bulgaria and Australia and steps for improvement and expansion of economic cooperation.

We are pleased to announce that the Bulgarian-Australian Business Council is now officially registered.
We are pleased to announce that on 22 of February 2018, the Bulgarian-Australian Business council has been officially registered. BABC is the first organization established in Bulgaria that provides a direct platform and network for Australian and Bulgarian companies and individuals.
The focus of the organization will be to support members' trade and business activities through developing business and investment opportunities, making and improving business contacts, and facilitating the exchange of information.
The mission of the Bulgarian Australian Business Council is to provide a networking platform for companies, organizations and business people of all nationalities involved or interested in business between Bulgaria and Australia.
BABC will strive to create a stable network to facilitate relationships between professional groups, individuals, government bodies and associations.
The founding members nominated at the Constituent Assembly, which was carried out in December 2017 are Joana Kehlibarova – elected as President of the Management Board, Dimitar Stoimenov and Eric Michel Yvon Durand – appointed as Chairmen of the Board of BABC.
Membership in the Bulgarian Australian Business Council is open to individuals and companies who have interest and wish to expand their network or business in Bulgaria and Australia.
BABC is registered and will be seated in Sofia, Bulgaria at the following address: 2G Nikolay Haitov Str., entr. G, floor 12.

For more information and to learn how to become a member of BABC, please visit the membership zone section in our website or contact us at info[at]babc[dot]biz.